I want to be like you! Orangutan wears zoo visitor’s sunglasses after they fell into her enclosure in Indonesia

By Darren Boyle for MailOnline

This is the moment an orangutan tried out a pair of sunglasses which had been accidentally dropped into her enclosure at an Indonesian zoo.

The large female ape, who was carrying her baby, ambled towards the sunglasses after they fell inside the enclosure at the Taman Safari park in Bogor, Indonesia.

Park visitor Olita Tetsu was looking down at the orangutans when her glasses slid off the top of her head and fell into the enclosure. 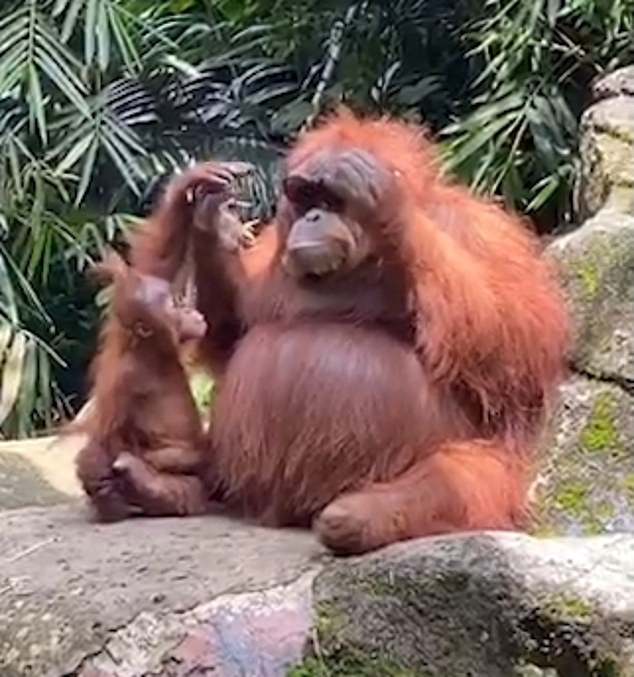 This is the moment an orangutan at the Taman Safari park in Bogor, Indonesia tries out a pair of sunglasses after their owner accidentally dropped the shades into the ape enclosure 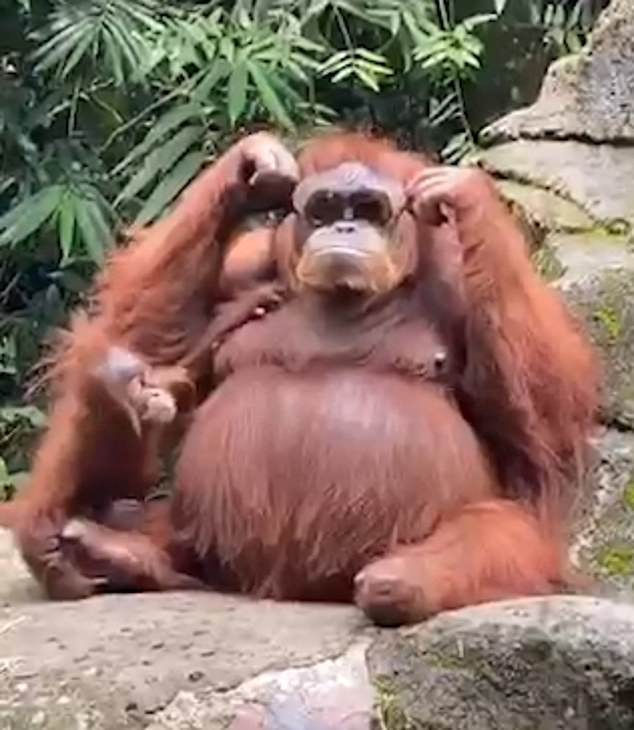 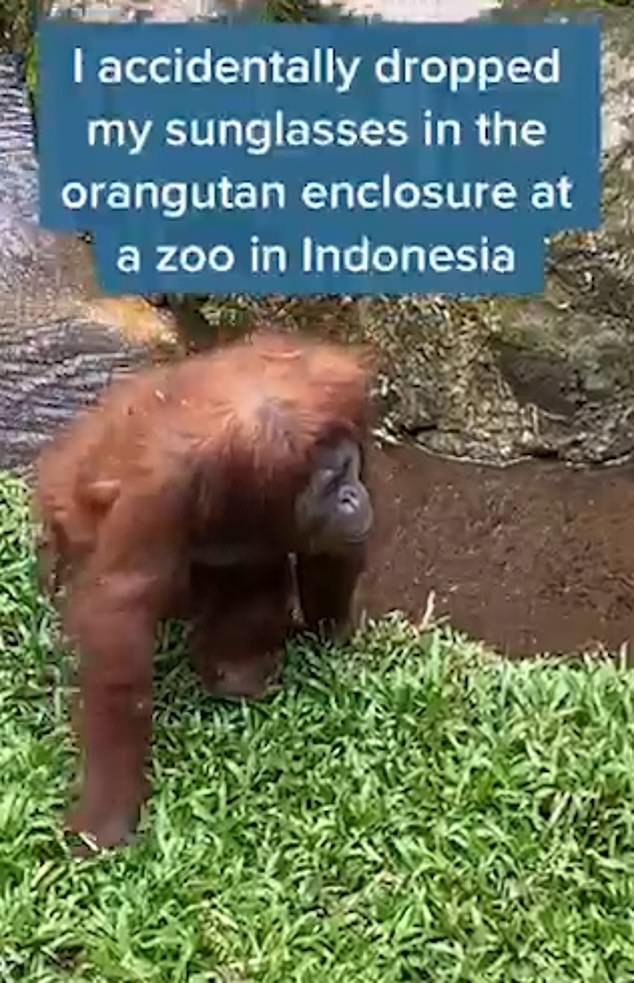 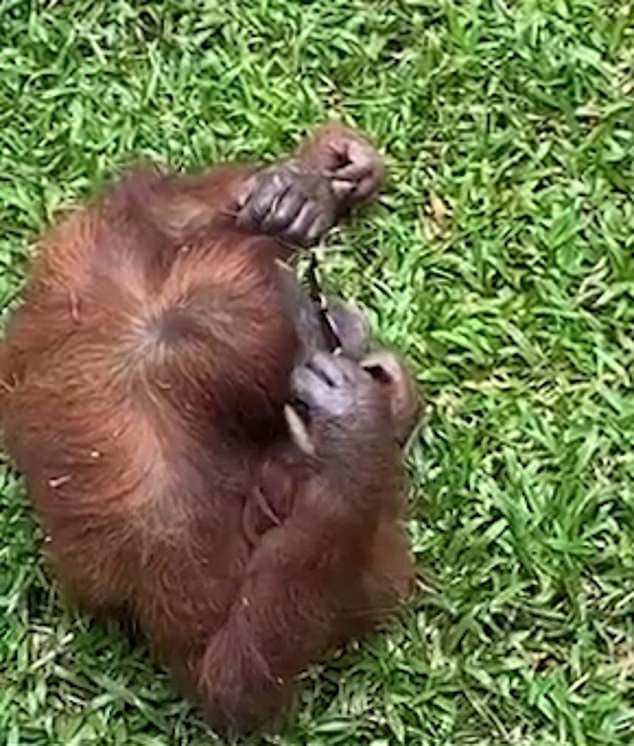 She said: 'I was leaning over to look at some orangutans on the bottom of the enclosure when my sunglasses fell off my head.

'After a couple of minutes one of the mama orangutans came over and picked up the glasses and the rest is on camera!'

The orangutan spent more than a minute playing with the glasses, trying to determine exactly how they would sit on her head.

In the footage Ms Tetsu can be heard exclaiming as the orangutan picked up her glasses. The ape then put them in her mouth, prompting the visitor to say: 'Oh no, don't eat them.'

But it only took the orangutan a few moments to work out how the hinges allowed the temples to swing out, before she placed the sunglasses on the bridge of her nose.

The inquisitive ape then tried to look through the glasses from the opposite side, through the outward facing lens.

At one stage, her baby tried to grab the glasses but was warned away.

After more than a minute with the glasses, the orangutan decided to return the sunglasses and threw them out of the enclosure.

On social media, people who viewed the footage were impressed by the orangutan. 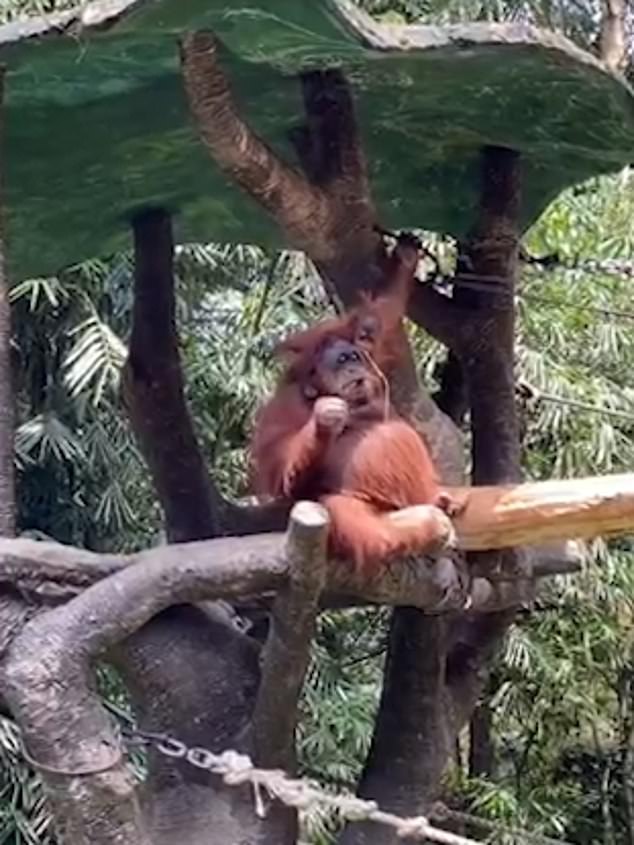 Eventually, the orangutan retired up a tree and flung the glasses out of her enclosure

Although, one user claimed: 'The fact she knew what to do with them kinda scare me.'

Commenting on the moment the baby tried to grab the glasses, Bailey said on TikTok: 'Moms can't have nothing to ourselves no matter the species.'

'They are just unable to speak our language.'

Mary added: 'It looked like she was checking to see if they were a brand name.'

VIDEO: Orangutan wears zoo visitor's sunglasses after they fell into her enclosure in Indonesia

The comments below have been moderated in advance.

The views expressed in the contents above are those of our users and do not necessarily reflect the views of MailOnline.

We are no longer accepting comments on this article.

Part of the Daily Mail, The Mail on Sunday & Metro Media Group