Our planet's solid-iron inner core has been growing faster on one side than the other for more than half a billion years, study finds

By Ryan Morrison For Mailonline

The solid-iron inner core of the Earth has been growing faster on one side than the other for over 500 million years, according to a new study.

It is growing faster under Indonesia's Banda Sea than under Brazil, but this uneven growth pattern hasn't left the core lopsided, say seismologists at the University of California, Berkeley, who have been investigating the phenomenon.

Gravity has acted to evenly distribute the new growth, made up of iron crystals that form as molten iron begins to cool, maintaining a spherical inner core.

Even though it doesn't leave the core lopsided, this uneven growth rate suggests something in the outer core under Indonesia is removing heat from the inner core at a faster rate than it is under Brazil on the opposite side of the planet, the team said.

Researchers say this discovery has helped them 'prove rather loose bounds' for the age of the inner core, to between half a billion and 1.5 billion years. 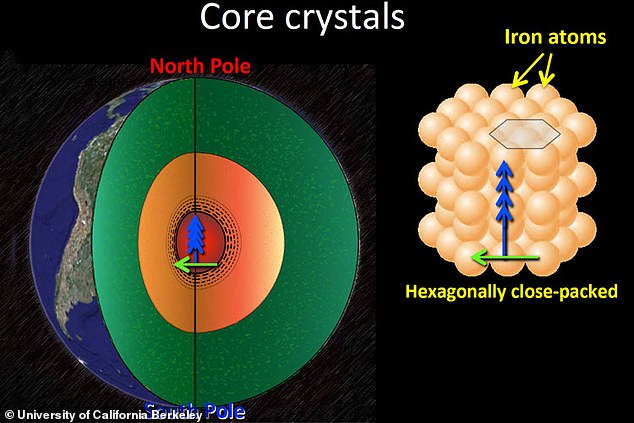 A cut-away of Earth’s interior shows the solid iron inner core (red) slowly growing by freezing of the liquid iron outer core (orange). Seismic waves travel through the Earth’s inner core faster between the north and south poles (blue arrows) than across the equator (green arrow)

FOUR LAYERS OF THE PLANET EARTH

Crust: To a depth of up to 70km, this is the outermost layer of the Earth, covering both ocean and land areas.

Mantle: Going down to 2,890km with the lower mantle, this is the planet's thickest layer and made of silicate rocks richer in iron and magnesium than the crust overhead.

Outer core: Running from a depth of 2,890- 5,150km, this region is made of liquid iron and nickel with trace lighter elements.

Inner core: Going down to a depth of 6,370km at the very centre of planet Earth, this region is thought to be made of solid iron and nickel.

This boundary for the age of the solid core of the Earth can help scientists learn more about the magnetic field, which protects us from harmful solar radiation.

'It can help in the debate about how the magnetic field was generated prior to the existence of the solid inner core,' said Barbara Romanowicz, study co-author.

'We know the magnetic field already existed 3 billion years ago, so other processes must have driven convection in the outer core at that time.'

The youngish age of the inner core may mean that, early in Earth's history, the heat boiling the fluid core came from light elements separating from iron, not from crystallisation of iron, which we see today.

'Debate about the age of the inner core has been going on for a long time,' said Daniel Frost, assistant project scientist.

'The complication is: If the inner core has been able to exist only for 1.5 billion years, based on what we know about how it loses heat and how hot it is, then where did the older magnetic field come from?

'That is where this idea of dissolved light elements that then freeze out came from.'

Asymmetric growth of the inner core, that is growing at different rates on each side of the planet,  explains a three-decade-old mystery, Frost explained.

The mystery is that the crystallised iron in the core seemed to be more likely to be aligned to the west than the east of Earth's rotational axis. 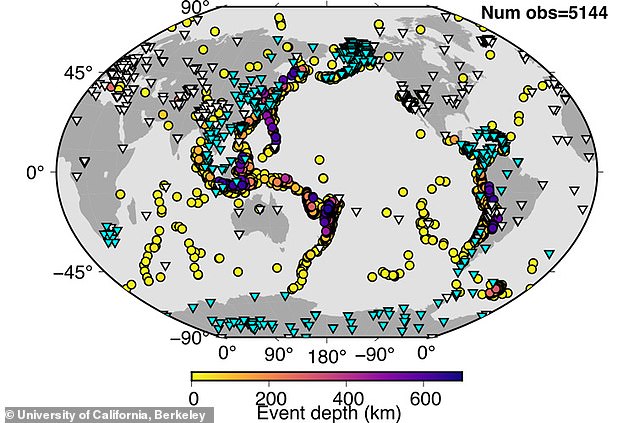 The team say scientists would expect the crystals to be randomly oriented than have them favour one side of the planet than the other.

In an attempt to explain the observations, they created a computer model of crystal growth in the inner core.

Their model incorporated geodynamic growth, how materials on earth deform and form, and the mineral physics of iron at high pressure and high temperature.

'The simplest model seemed unusual - that the inner core is asymmetric,' Frost said.

'The west side looks different from the east side all the way to the center, not just at the top of the inner core, as some have suggested. The only way we can explain that is by one side growing faster than the other.'

The model describes how asymmetric growth - about 60 per cent higher in the east than the west - can preferentially orient iron crystals along the rotation axis, with more alignment in the west than in the east.

'What we're proposing in this paper is a model of lopsided solid convection in the inner core that reconciles seismic observations and plausible geodynamic boundary conditions,' Romanowicz said.

Even though it doesn't leave the core lopsided, this uneven growth rate suggests something in the outer core under Indonesia is removing heat from the inner core at a faster rate than it is under Brazil on the opposite side of the planet, the team said

Earth's interior is layered like an onion. The solid iron-nickel inner core is 745 miles) in radius, or about three-quarters the size of the moon and is surrounded by a fluid outer core of molten iron and nickel about 1,500 miles thick.

The outer core is surrounded by a mantle of hot rock 1,800 miles thick and overlain by a thin, cool, rocky crust at the surface.

Convection occurs both in the outer core, which slowly boils as heat from crystallising iron comes out of the inner core, and in the mantle, as hotter rock moves upward to carry this heat from the centre of the planet to the surface. 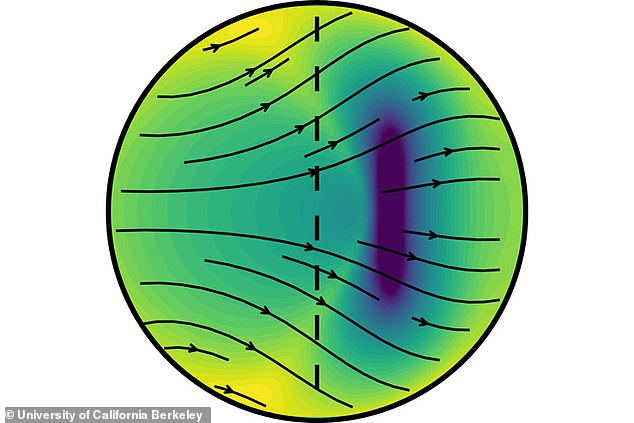 A new model by UC Berkeley seismologists proposes that Earth’s inner core grows faster on its east side (left) than on its west. Gravity equalizes the asymmetric growth by pushing iron crystals toward the north and south poles (arrows)

WHAT IS EARTH'S MAGNETIC FIELD AND HOW DOES IT PROTECT US?

Earth's magnetic field is a layer of electrical charge that surrounds our planet.

The field protects life on our planet because it deflects charged particles fired from the sun known as 'solar wind'.

Without this protective layer, these particles would likely strip away the Ozone layer, our only line of defence against harmful UV radiation.

Scientists believe the Earth's core is responsible for creating its magnetic field.

As molten iron in the Earth's outer core escapes it creates convection currents.

These currents generate electric currents which create the magnetic field in a natural process known as a geodynamo.

According to Frost's computer model, as iron crystals grow, gravity redistributes the excess growth in the east toward the west within the inner core.

Movement of crystals in the inner core, close to the melting point of iron, aligns the crystal lattice with the Earth's rotational axis - doing so more to the west than the east, they found.

The anisotropy, or difference in travel times parallel and perpendicular to the rotation axis, increases with depth.

The strongest anisotropy is offset to the west from Earth's rotation axis by about 250 miles.

The model of inner core growth also provides limits on the proportion of nickel to iron in the centre of the earth, Frost said.

His model does not accurately reproduce seismic observations unless nickel makes up between four per cent and eight per cent of the inner core.

This is close to the proportion in metallic meteorites that once were the cores of dwarf planets in our solar system.

The model also tells geologists how viscous, or fluid, the inner core is.

'We suggest that the viscosity of the inner core is relatively large,' said Romanowicz.

This is 'an input parameter of importance to geodynamicists studying the dynamo processes in the outer core.'

The findings are due to be presented in the the journal Nature Geoscience.

The comments below have not been moderated.

The views expressed in the contents above are those of our users and do not necessarily reflect the views of MailOnline.

By posting your comment you agree to our house rules.

Your comment will be posted to MailOnline as usual.

Your comment will be posted to MailOnline as usual

iPad Pro review: Apple takes the tablet to new heights (at a price)
Apple's new iPad is blazingly fast, gorgeous to look at, and quite simply the best tablet out there - and for a lot of people, probably the best computer out there.
The small smart display with big potential: Google Home Hub review
Google is late to the game with its Home Hub, but the low price and AI features make it a great choice for controlling your home, showing pictures and even helping run your life.
'Good enough for most people': iPhone XR review
On one hand, the XR lacks the high-resolution screen and dual-lens camera on the XS. but it is $250 cheaper and still get most of the other cutting-edge features found on the more expensive model.
The Pixel 3 outsmarts the iPhone (IF you trust Google with all your information)
AI seems to permeate every part of its software, from the ability to answer calls for you to being able to almost perfectly predict your morning commute.
Bigger and better in every way: Apple's XS really does take the iPhone to the Max
Apple's new iPhone XS and XS Max go on sale on Friday - and the biggest handset Apple has ever made is also its best (and possibly unsurprisingly, its most expensive).
The $250 beauty device that works like 'Photoshop for your face'
Israeli beauty-tech firm Pollogen has launched its Geneo Personal device, which stimulates oxygen from beneath the skin's surface to give you a clearer, fresher face within minutes.
iOS 12 review: The update that really will improve your iPhone
Rather than cram in a plethora of new features, Apple's latest update is about boosting stability, with improvements in everything from FaceID and battery life.
Naim Atom: The hifi that will change the way you listen to music
It's eye-wateringly expensive at $2,999, but Naim's Uniti Atom is a revelation, an integrated amplifier than makes it easy to stream music at a quality you've probably never heard before.
The $1,000 wireless speaker that really IS worth the price: Naim Mu-so Qb review
Naim's incredible Mu-So Qb takes you back to the good old days - where the music captivates and enthralls, rather that simply being something in the background.
The hi-tech $2,000 spin bike that really could change your life
Peloton's hi-tech bike lets you stream live and on demand rides to your home - and it's one of the best examples of fitness technology out there - at a price.
The best all in one wireless speaker you'll ever hear: Naim Mu-so review
It might not be a name familiar to the US market, but Naim is a legendary British brand hoping to make a splash with the American launch of its $1499 Mu:So speaker.

TOP DISCOUNTS OF THE WEEK

Part of the Daily Mail, The Mail on Sunday & Metro Media Group